Besides main temple, there are other temples in the inner compound. According to a map of the temple in the Record of Rights the temples, bije sthalis and there deities are listed below.

Vimala Temple– It is the oldest temple located in the inner compound of the main temple facing the east. There is the mention of Maa Vimala in the Matsya Purana, Kapila Samhita, Skanda Purana, Tantra Chudamani, Devi Bhagabata etc. It is said in the Tantra Sastra (Tantric Scriptures) that Maa Vimala and Shree Jagannatha are Bhairavi and Bhairava. The image of the goddess is said to have been built in Laksa (wax). She is four-armed. In three hands she holds an aksamala (rosary), a human figure and a kalasa (jar), while her fourth hand is in ‘Varada’ pose. This is a famous ‘Shakti Pitha’ of India. The Prasada of Shree Jagannatha is offered to Vimala. Saradiya Shola puja and special ritesare observed during the month of Aswaina in this temple every year.

Satya Narayana Temple– This temple enshrines the four-armed image of Shree Narayana, The upper right hand holds a disc, the lower right hand presents the ‘Abhaya mudra’, the upper left hand holds a conch and the lower wields a mace. The image is made of granite, it is 5 feet high. On both sides stand Jaya and Vijaya, at the feet of the Satya Narayana is placed Garuda kneeling down. The temple faces north.

Agneeswara Temple– This temple lies on the north-east corner of the passage that goes from the Bhoga Mandapa to the kitchen. He is regarded as the guardian of the fire of the kitchen.

Shree Nrusimha Temple– There is a temple for Nrusimha towards the southern side of the temple within its inner enclosure and this temple also faces to the east. The temple is a Panchratha Rekha Deula without a Jagamohana. It was built before the present Shree Mandira was constructed. Ancient stone inscriptions are there on the outside wall.The presiding deity of the temple is Nrusimha and a very small image of the deity is placed inside the temple on a high seat.

Lakshmi Temple– The temple of Lakshmi is situated on the north-western corner of the inner enclosure of the temple. It is believed that the temple was constructed by some ruler of the Ganga dynasty in the 12th-13th century A.D. The temple is almost contemporary on architectural style to the temple of Jagannatha, Goddess Lakshmi is worshipped in the sanctum of the temple. She is a form of Gajalakshmi, holding two elephants in the upper two hands. She is four armed and the lower hands show ‘abhaya’ and ‘varada’ postures.

Surya Temple– This temple is situated on the northern side of the temple of Shree Jagannatha and faces the east. It is saptaratha in plan. The presiding deity of the temple is Surya, the Sun God. The image of the Sun installed in the temple is stated to have been brought from Konark by King Narasimha Deva of Bhoj dynasty (1622-1647 A.D).

Bhubaneswari Temple– Bhubaneswari stands in the western side of the temple, facing the east. In its Jagamohana, an image of Saraswati is housed towards the southern side, while the images of Savitri, Gayatri and Sasthi are installed on the northern side.

Nrutta Ganapati– The temple of this deity is situated in the south-western corner of the temple, facing the south. Inside the temple is installed a dancing image of Ganapati with eight arms. The temple is believed to have been erected sometime in the 13th century A.D.

Bata Ganesha– It is a notable temple dedicated to Ganesha below the Kalpabata within the temple premises. This is known as Bata Ganesha temple The figure of His vehicle, the mouse is installed in front of the temple. References are available to the effect that poet Jagannatha Das of the 16th century used to sit beside this temple and recite his compositions of Odia Bhagavata to a large congregations.

Kalpabata (Tree)– There is a big banyan tree within the inner enclosure of the temple on its southern side. The tree, known by the name ‘Kalpabata’, finds mention in Skanda Purana and Brahma Purana. Persons circumambulating the tree and stepping on its shadow attain ‘Kesavalaya’ i.e, the abode of Vishnu.

Rohini Kunda (Pool)– It is stated in Skanda Purana that in the navel area of this kshetra, there are three things, i.e, the Rohini Kunda, the Kalpabata and the image of God. The said Kunda (Pool) is situated slightly on the western side of the banyan tree. It is considered sacred due to the presence of Vishnu and Lakshmi. Now this Pool is Visible in the form of a water-vat made of stone, which does not contain natural water. Inside the Vat, there are two carvings, in two separate squares, one of the Nila Chakra of Vishnu and the other of a four-handed crow. Water is poured there and it is sprinkled on the pilgrims.

Mukti Mandapa (Brahmasana)– The Mukti Mandapa is 38’ in length and 38’ wide. It is square in size. It has 16 pillars. According to Madalapanji, it was renovated by Gourirani, the wife of Mansingh, the chief of the army of the Mughal Emperor Akbar. Brahmin pandits belonging to certain villages and Dandi sanyasis, Jagadguru Sankaracharya, Deula Purohita and Rajguru’s are entitled to sit on the Muktimandapa. 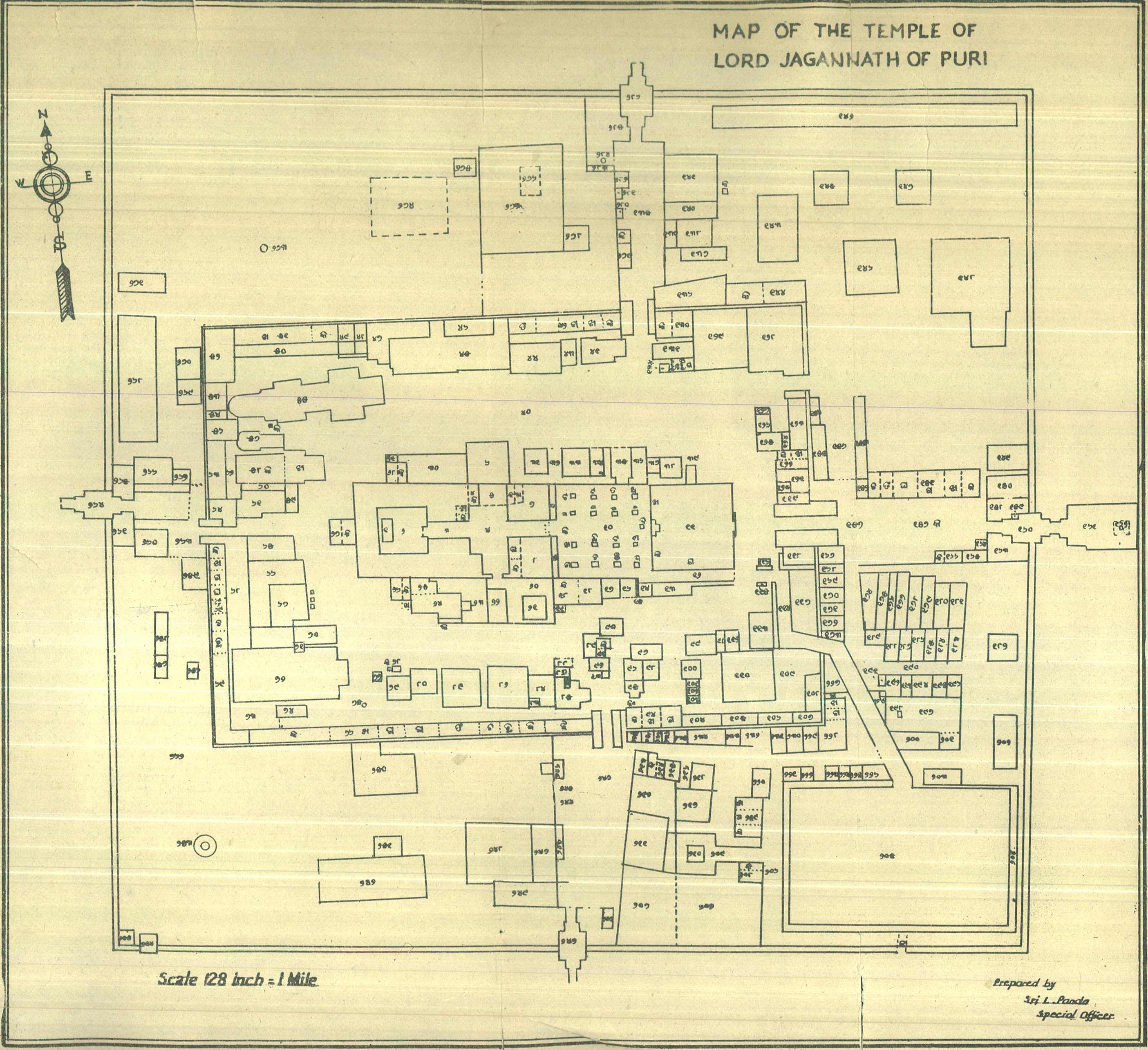